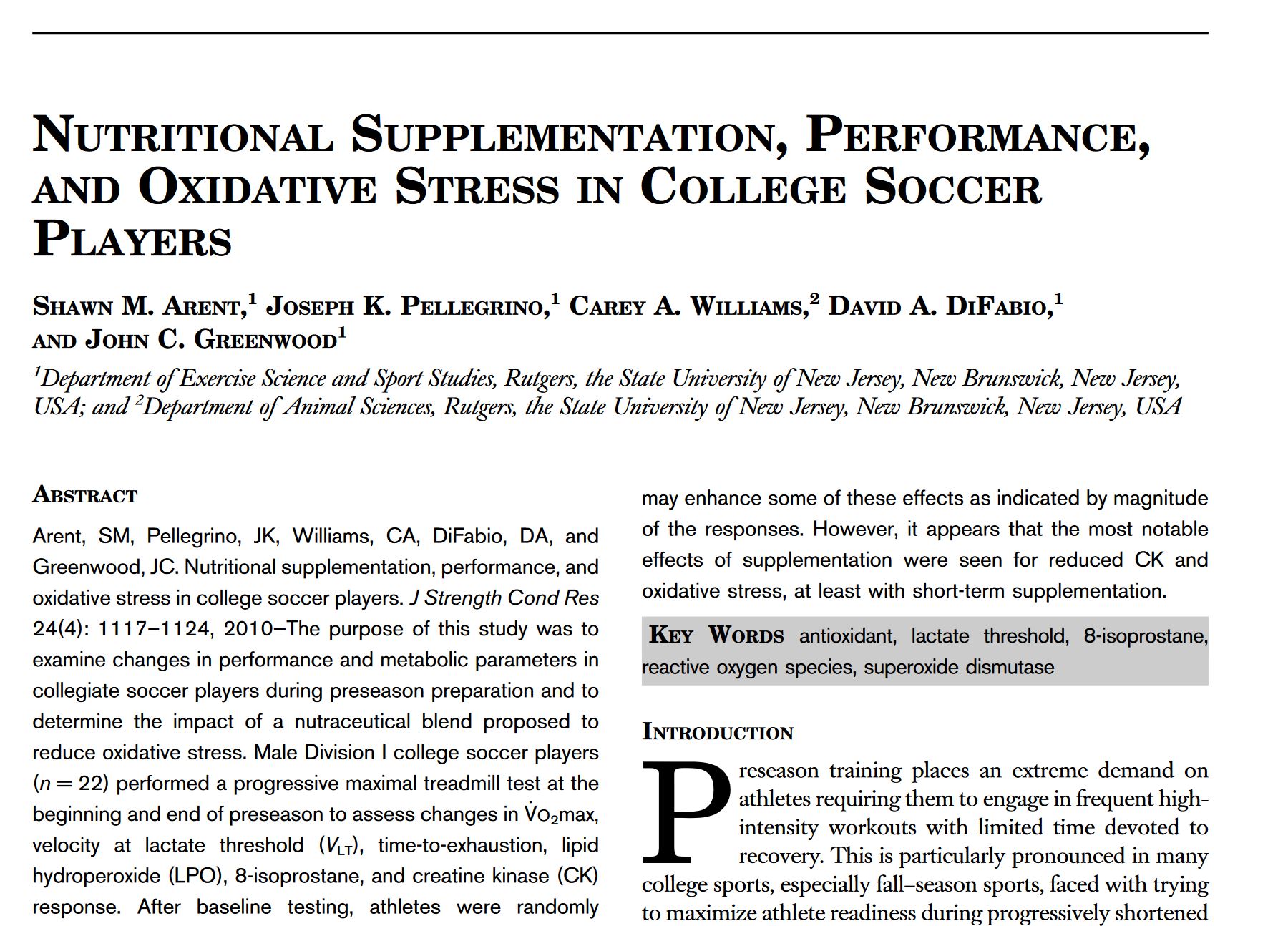 The purpose of this study was to examine changes in performance and metabolic parameters in collegiate soccer players during preseason preparation and to determine the impact of a nutraceutical blend proposed to reduce oxidative stress. Male Division I college soccer players (n = 22) performed a progressive maximal treadmill test at the beginning and end of preseason to assess changes in Vo2max, velocity at lactate threshold (VLT), time-to-exhaustion, lipid hydroperoxide (LPO), 8-isoprostane, and creatine kinase (CK) response.
After baseline testing, athletes were randomly assigned to receive the nutraceutical blend (EXP; n = 12) or an isocaloric equivalent (CON; n = 10) for 20 days of preseason training. DeltaVo2max (2.1 +/- 3.3 ml.kg.min, p = 0.007), DeltaVLT (0.8 +/- 1.4 km.h, p = 0.045), and Deltatime-to-exhaustion (39.4 +/- 77.4 seconds, p = 0.033) were improved across groups, but a significant effect of supplementation on performance was not seen. Changes in resting levels of CK from the beginning to end of preseason were significantly lower (p = 0.044) in EXP (64.8 +/- 188.4 U.L) than in CON (292.8 +/- 304.8 U.L). Additionally, EXP demonstrated a significant decrease in the magnitude of the 8-isoprostane response at Trial 2 compared with Trial 1 (effect size [ES] = -0.74), whereas CON had an increased response (ES = 0.20). A similar pattern was seen for LPO (p = 0.067).
Preseason training in male college soccer players resulted in significant improvements in Vo2max, VLT, and time-to-exhaustion. Supplementing with a proprietary antioxidant and nutraceutical blend may enhance some of these effects as indicated by magnitude of the responses.
However, it appears that the most notable effects of supplementation were seen for reduced CK and oxidative stress, at least with short-term supplementation.
View publication
Categories: 8. Sport Nutrition, Scientific studiesApril 1, 2010
Share this post
Share on LinkedInShare on LinkedIn