Could a photobiological test be a suitable method to assess the anti-oxidant effect of a nutritional supplement (Glisodin)? 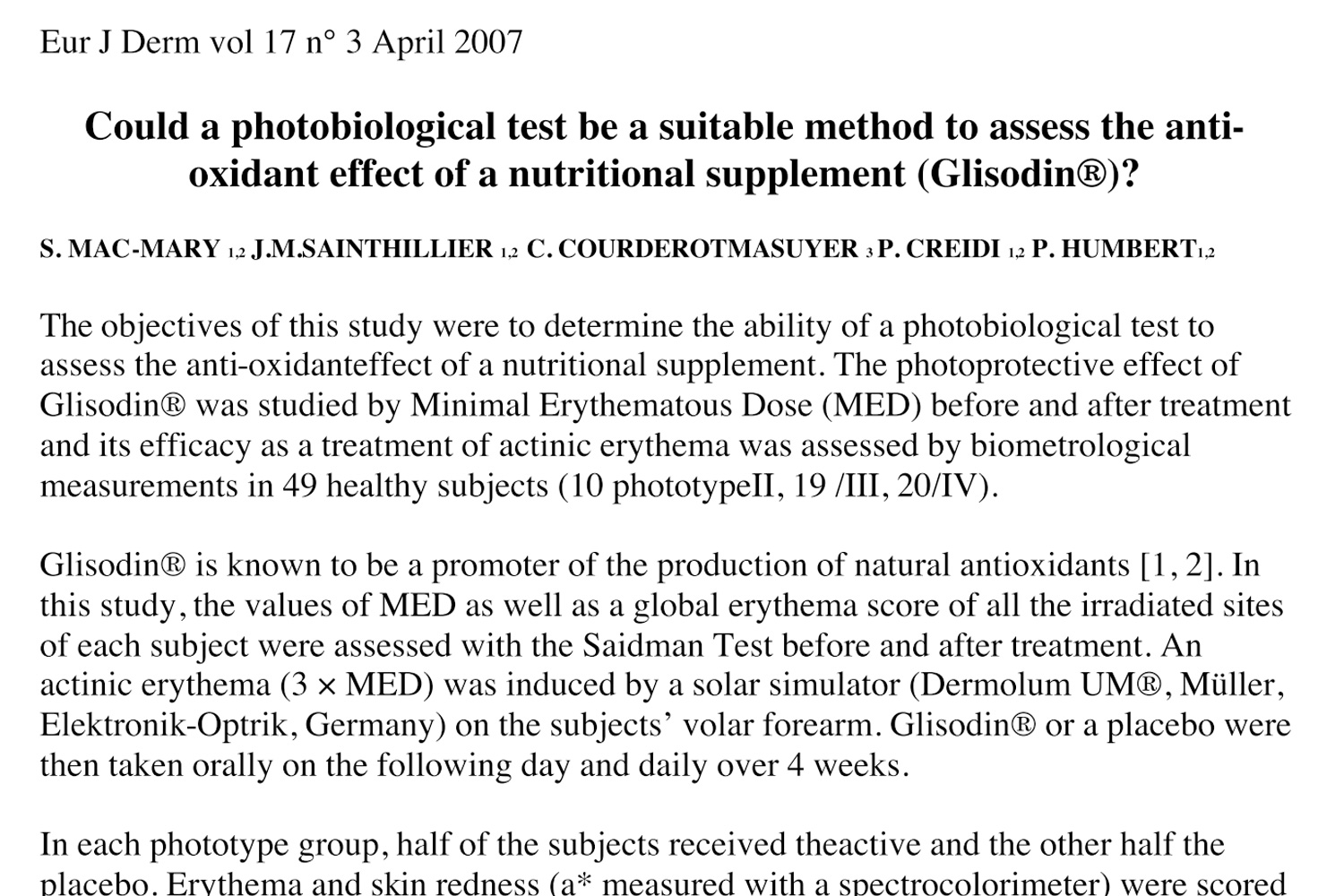 The objectives of this study were to determine the ability of a photobiological test to assess the anti-oxidanteffect of a nutritional supplement. The photoprotective effect of Glisodin® was studied by Minimal Erythematous Dose (MED) before and after treatment and its efficacy as a treatment of actinic erythema was assessed by biometrological measurements in 49 healthy subjects (10 phototypeII, 19 /III, 20/IV).
Glisodin® is known to be a promoter of the production of natural antioxidants [1, 2]. In this study, the values of MED as well as a global erythema score of all the irradiated sites of each subject were assessed with the Saidman Test before and after treatment. An actinic erythema (3 × MED) was induced by a solar simulator (Dermolum UM®, Müller, Elektronik-Optrik, Germany) on the subjects’ volar forearm. Glisodin® or a placebo were then taken orally on the following day and daily over 4 weeks.
In each phototype group, half of the subjects received theactive and the other half the placebo. Erythema and skin redness (a* measured with a spectrocolorimeter) were scored 24 hours after irradiation (immediately before the first oral intake) then every week for 4 weeks.
An analysis of the capillary network by videocapillaroscopy [3] completed these measurements. The intake of Glisodin® induced an increase of the MED, particularly in phototype II (8.8 % versus 1.2 % for placebo group) and III (1.7%versus 1.0%) whereas in phototype IV, no changes were observed with both products. Simultaneously, the associated score of erythema decreased (–21.2% against 7.1 % for placebo). Clinical scoring of the actinic erythema (onthe forearm) decreased but no differences were observed between both groups. Redness (a*) decreased rapidly in the Glisodin® group (– 37% over one week with active versus – 28.6% with placebo for phototype II, – 28.6 %versus – 28.8 % for phototype III and – 32.5% versus– 27.6% for phototype IV).

The number of capillaries increased with time (+ 24.6% after one week with active versus –8.4% with placebo for phototype II, + 44.4% versus + 17.5% for phototype III and + 6.5 % versus + 3.0% for phototype IV). This progression could be explained by the quicker return to basal values with GliSODin®. Although there was no significant difference between the treated group and the placebo group, this study suggests that the efficacy of the treatment in solar protection and on actinic erythema seems better on the lowest phototypes. It would be interesting to complete the investigation with amore homogeneous and numerous population (phototype II and III), with measurements taken daily during the first week at the beginning of the study and a pre-treatment(2 or 3 weeks).