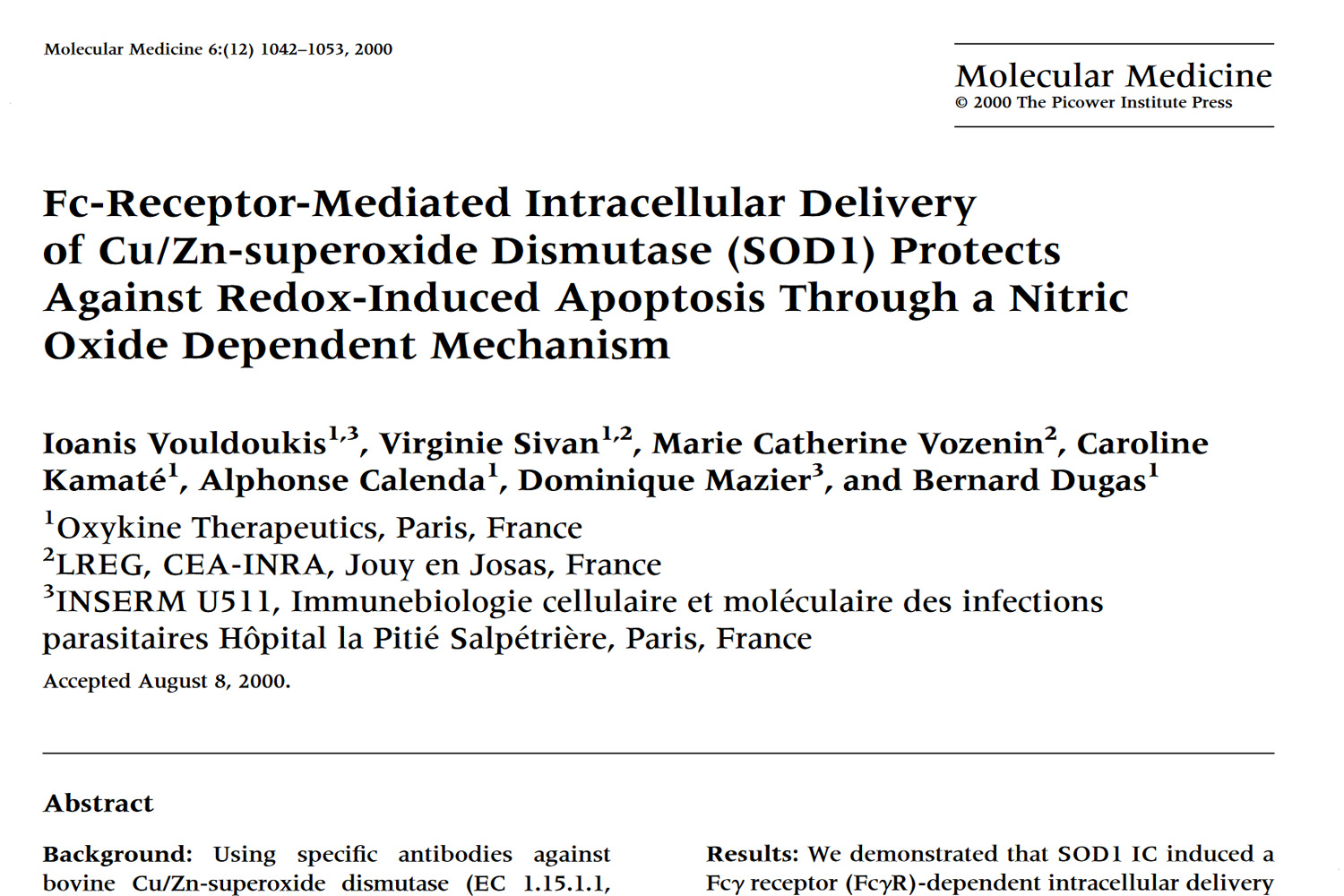 Background: Using specific antibodies against bovine Cu/Zn-superoxide dismutase (EC 1.15.1.1, SOD1) we demonstrated that anti-SOD antibodies (IgG1) are able to promote the intracellular translocation of the antioxidant enzyme. The transduction signalling mediated by IgG1 immune complexes are known to promote a concomitant production of superoxide and nitric oxide leading to the production of peroxynitrites and cell death by apoptosis. The Fc-mediated intracellular delivery of SOD1 thus limited the endogenous production of superoxide. It was thus of interest to confirm that in the absence of superoxide anion, the production of nitric oxide protected cells against apoptosis. Study in greater detail clearly stated that under superoxide anion-free conditions, nitric oxide promoted the cell antioxidant armature and thus protected cells against redox-induced apoptosis.

Materials and methods: The murine macrophage cell-lines J774 A1 were preactivated or not with interferon-gamma and were then stimulated by IgG1 immune complexes (IC), free SOD1 or SOD1 IC and superoxide anion, nitric oxide, peroxynitrite, and tumor necrosis factor-alpha (TNF-alpha) production was evaluated. The redox consequences of these activation processes were also evaluated on mitochondrial respiration and apoptosis as well as on the controlled expression of the cellular antioxidant armature.

Results: We demonstrated that SOD1 IC induced a Fcgamma receptor (FcgammaR)-dependent intracellular delivery of the antioxidant enzyme in IFN-gamma activated murine macrophages (the J774 AI cell line). The concomitant stimulation of the FcyR and the translocation of the SOD1 in the cytoplasm of IFN-gamma-activated macrophages not only reduced the production of superoxide anion but also induced the expression of the inducible form of nitric oxide synthase (iNOS) and the related NO production. This inducing effect in the absence of superoxide anion production reduced mitochondrial damages and cell death by apoptosis and promoted the intracellular antioxidant armature.

Conclusions: To define the pharmacologic mechanism of action of bovine SOD1, we attempted to identify the second messengers that are induced by SOD1 IC. In this work, we propose that Fc-mediated intracellular delivery of the SOD1 that reduced the production of superoxide anion and of peroxynitrite, promoted a NO-induced protective effect in inducing the antioxidant armature of the cells. Taken together, these data suggested that specific immune responses against antigenic SOD1 could promote the pharmacological properties of the antioxidant enzyme likely via a NO-dependent mechanism.