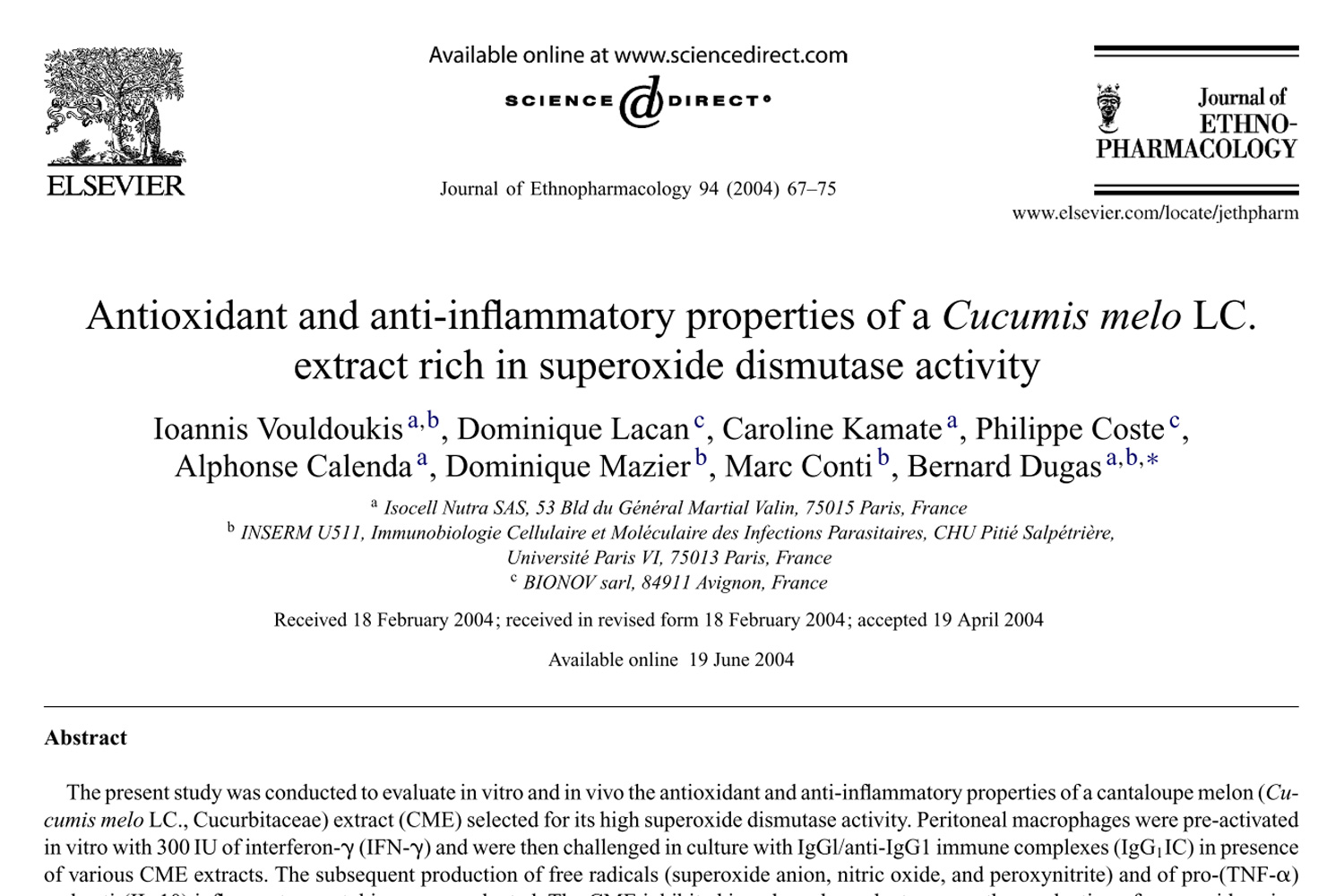 The present study was conducted to evaluate in vitro and in vivo the antioxidant and anti-inflammatory properties of a cantaloupe melon (Cucumis melo LC., Cucurbitaceae) extract (CME) selected for its high superoxide dismutase activity. Peritoneal macrophages were pre-activated in vitro with 300 IU of interferon-gamma (IFN-gamma) and were then challenged in culture with IgGl/anti-IgG1 immune complexes (IgG1IC) in presence of various CME extracts. The subsequent production of free radicals (superoxide anion, nitric oxide, and peroxynitrite) and of pro-(TNF-alpha) and anti-(IL-10) inflammatory cytokines was evaluated.

The CME inhibited in a dose-dependent manner the production of superoxide anion with a maximal effect at 100 microg/ml. This inhibitory effect of CME appeared to be closely linked to the SOD activity because it was dramatically decreased after heat inactivation of the SOD activity (HI-CME). In addition, the CME inhibited the production of peroxynitrite strengthening the antioxidant properties of this CME rich in SOD activity. The production of the pro- and anti-inflammatory cytokines, namely TNF-alpha and IL-10, being conditioned by the redox status of macrophages we also evaluated the effect of CME and HI-CME on the IgG1IC-induced cytokine production.

When the SOD activity was present in the CME it promoted the IgG1IC-induced production of IL-10 instead of TNF-alpha. These data demonstrated that, in addition to its antioxidant properties, the anti-inflammatory properties of the CME extract were principally related to its capacity to induce the production of IL-10 by peritoneal macrophages.

The particular properties of wheat gliadin (Triticum vulgare, Poaceae) for the oral delivery of functional proteins led us to test it in a new nutraceutical formula based on its combination with the CME thus monitoring the SOD activity release during the gastro-intestinal digestive process. In these experiments C57BL/6 mice were supplemented orally everyday during 28 days with: (1) the placebo, (2) the CME extract alone, (3) the gliadin, (4) the CME/gliadin combination, or (5) the HI-CME/gliadin combination (SOD inactivated). At the end of the supplementation period all the animals were injected intra-peritoneal (i.p.) with the pro-inflammatory cytokine IFN-gamma (300 IU) and peritoneal macrophages were harvested 24 h after to test their capacities to produce free radicals, TNF-alpha and IL-10 after triggering with IgG1IC.

We demonstrated that animals supplemented during 28 days with the CME/gliadin combination were protected against the pro-inflammatory properties of IFN-gamma while the other products were inefficient. These data did not only indicate that the SOD activity is important for the antioxidant and anti-inflammatory properties of the CME extract, but also demonstrated that when the SOD activity is preserved during the digestive process by its combination with wheat gliadin it is possible to elicit in vivo the pharmacological effects of this antioxidant enzyme.